I've created a printed circuit board (PCB) that simulates the game of life on a 5 by 5 LED grid, and can be remote controlled with Bluetooth. The project was created in collaboration with another student as a school project. Here is a video of the finished product:

The PCB simulating a glider in the game of life. 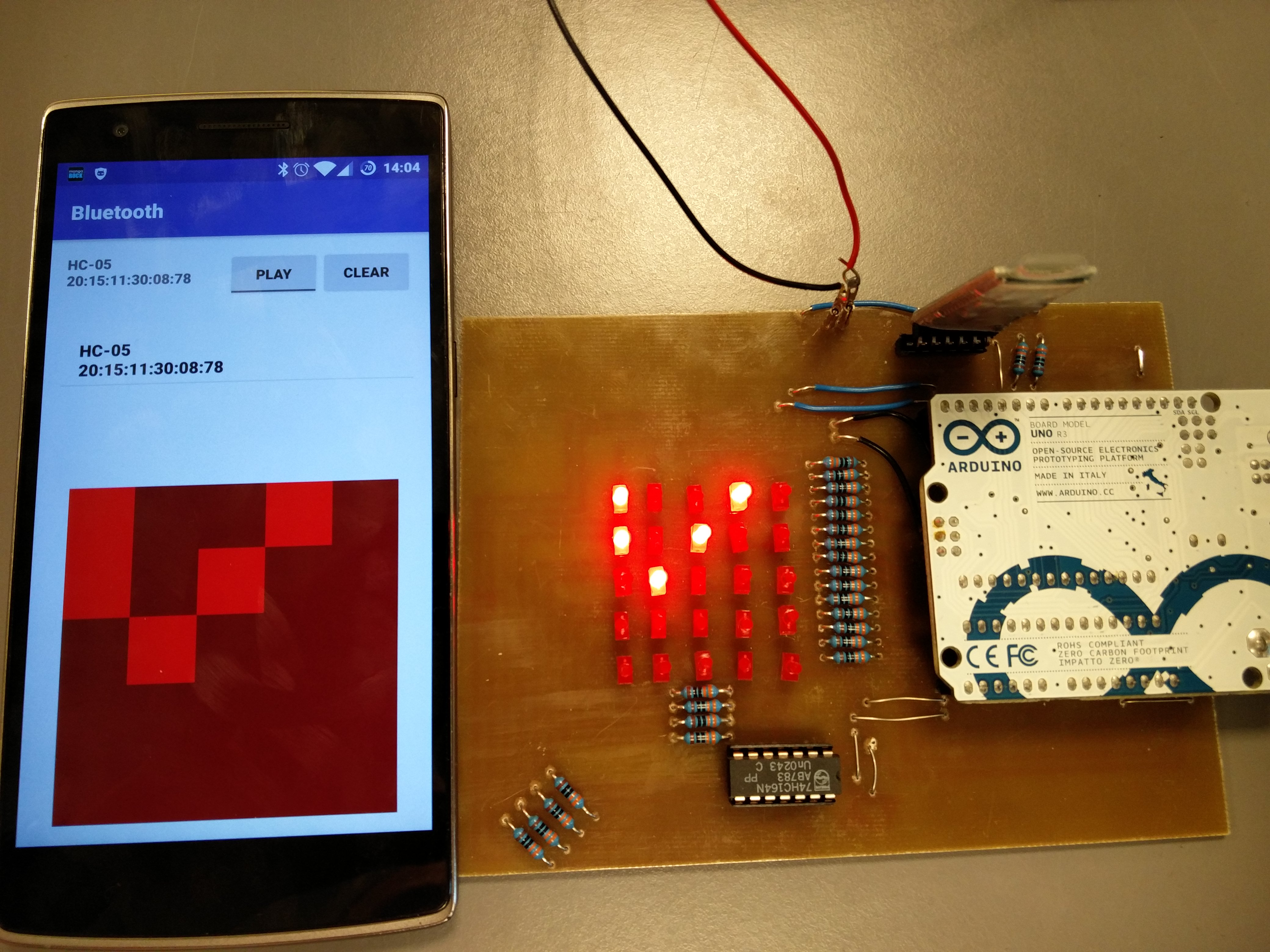 An image showing the circuit board and the app for remote control.

What is The Game of Life?

The Game of life is a simulation that runs in a two-dimensional grid of cells. The simulation is run in steps, where the next step depends only on the state of the previous. Each cell in the simulation is either dead or alive in each step.

Rules for computing the next step

This is performed on every cell in the grid, and results in the next state. Often when simulating the game of life, the grid is infinitely large, but I don't have that many LEDs, so my grid is just a 5 by 5 grid. There are two ways to handle finite grids: Just let the grid have an edge, or let it wrap around. I've chosen to let the grid wrap around, since this allows me to have a glider, that goes on forever.

The configuration shown in the video at the start of the article is called a glider. It is a pattern that moves forever, and is small enough fit in my 5 by 5 grid, without interfering with itself over the edges. This is the best way to show the wrap around in this grid.

The main challenge in this project is that the Arduino UNO doesn't have enough digital outputs to control 25 LEDs. I solved this problem by adding 3 shift registers, on which I push the state of the LEDs.

What is a shift register?

In the Arduino code I have an array that maps an LED coordinate to the index in the shift register, which is how the code knows how to control each LED.

The shift register used in this project has a few additional inputs: A, B, CLOCK and CLR. The VAL input I mentioned earlier is split into the inputs A and B, and the VAL input is regarded to have the value true only if both A and B are true. The CLR input just sets all outputs to low.

In order to update the board once, the Arduino has to write to the shift registers 24 times. The reason that it needs to write 24 times, even though 3 LEDs are connected directly to the Arduino is elaborated on in the Imperfections section.

The shift registers I used are called 74HC164N. 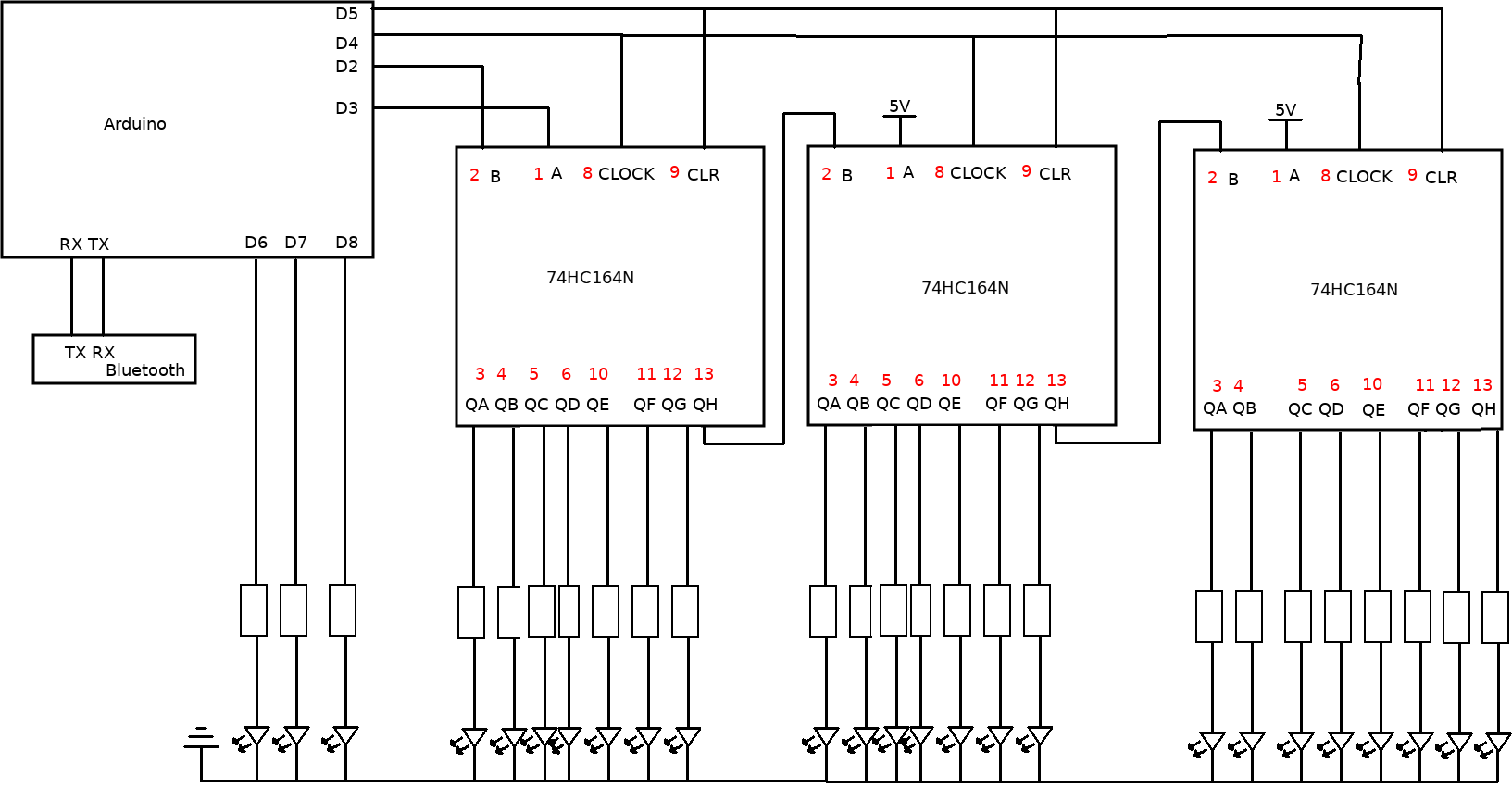 The design of the PCB quickly created in paint. All resistors are 330 Ω.

The circuit board is very simple; it just chains some integrated circuits and connects them to LEDs. The resulting layout, which I created from the design above, is shown below: 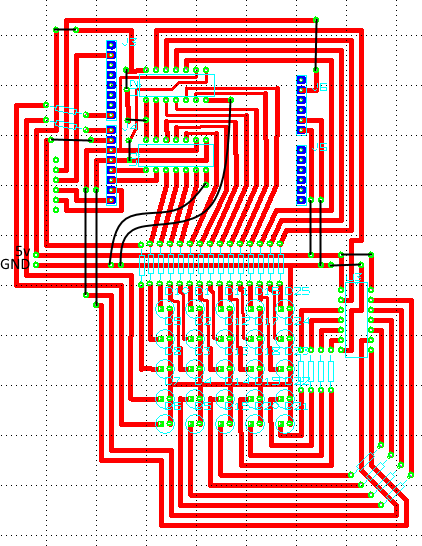 The layout of the PCB. All resistors are 330 Ω and all integrated circuits are 74HC164N.

In hindsight, I probably shouldn't have placed the 5V and ground inputs so close to each other. Here's a picture of the finished PCB: 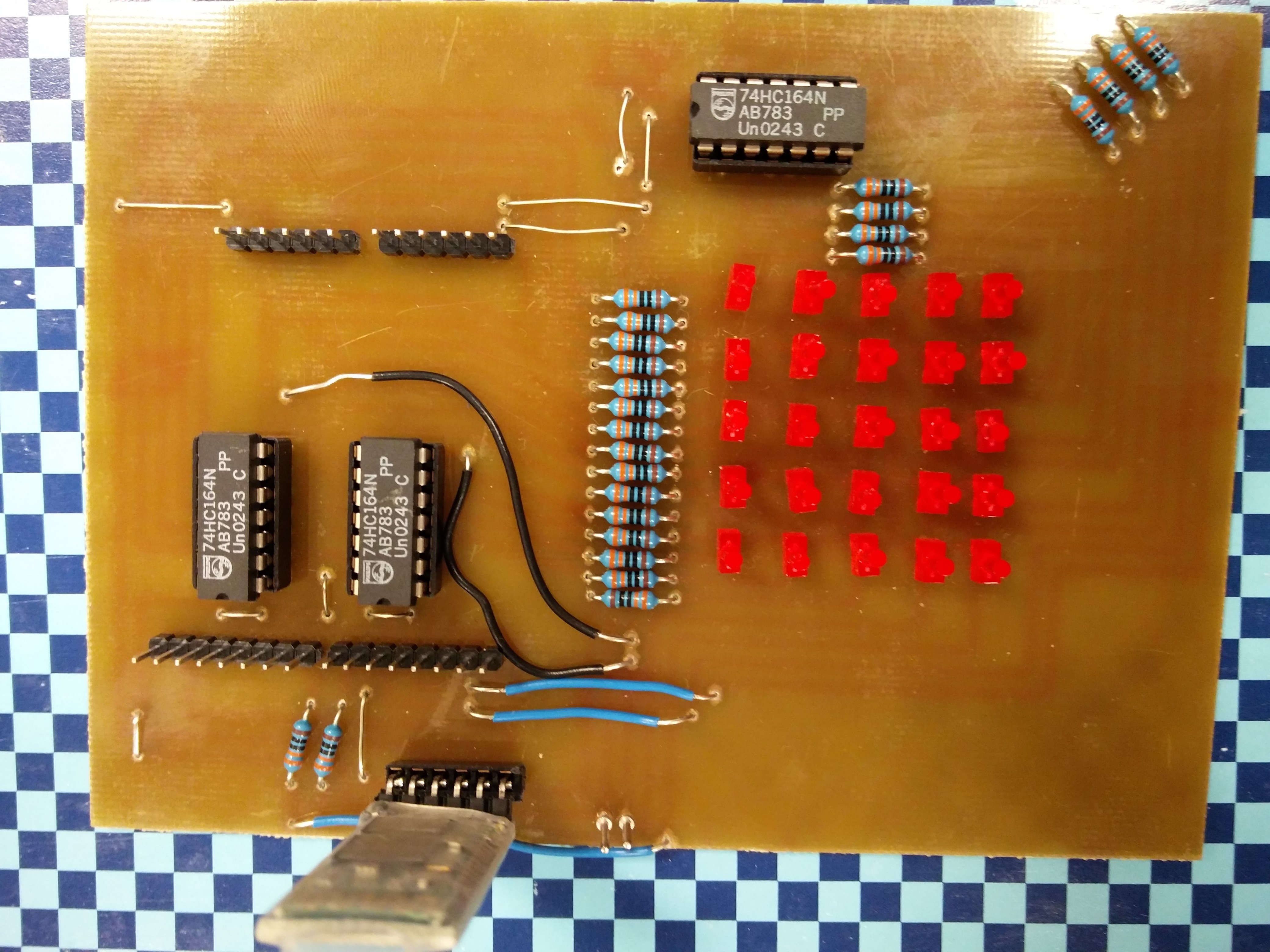 The finished PCB. The board was just barely not wide enough for the layout, so I changed one of the outer traces to a wire.

The software consists of two components: the Arduino code and the Android app.

The Arduino code is available here. The code needs to handle two things simultaneously: Running the game of life and receiving commands over Bluetooth. Bluetooth works by have the function serialEvent run every time new data is received via Bluetooth. To avoid changes to the gol array while the next step is being computed, the changes received via Bluetooth are stored in a separate array, and committed to the gol array when the step computation has completed. This results in a loop function like the one below:

Bluetooth works by sending a stream of characters, so some method of marking the end of a message is needed. In this project I've opted for delimiting commands with an exclamation mark. The Arduino code accepts the command clr!, which clears the board, the commands g 0! and g 1!, which pause and unpause the board, and [LED id] [0 or 1]!, which turns a LED on or off.

The Android code was written entirely by my partner in this project, so this section will be short. The android code is available here, and a picture of the app is shown below: 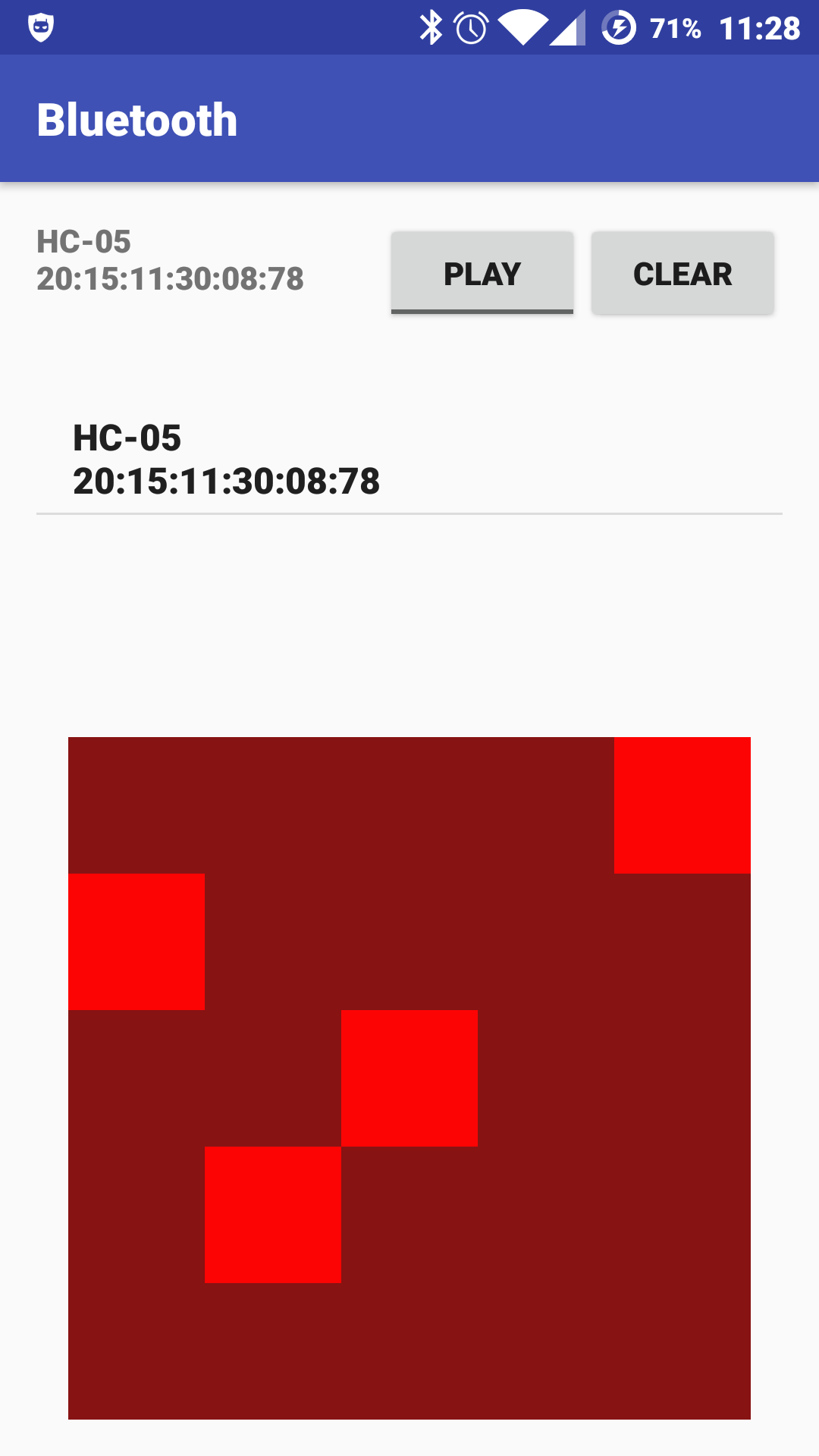 Screenshot of the app created for this project.

Unfortunately there are some imperfections present in this project. The main one has to do with the design of the circuit board. If you look at the Arduino code, you will see the following workaround:

This means that the Arduino has to control 3 LEDs directly, instead of just one.